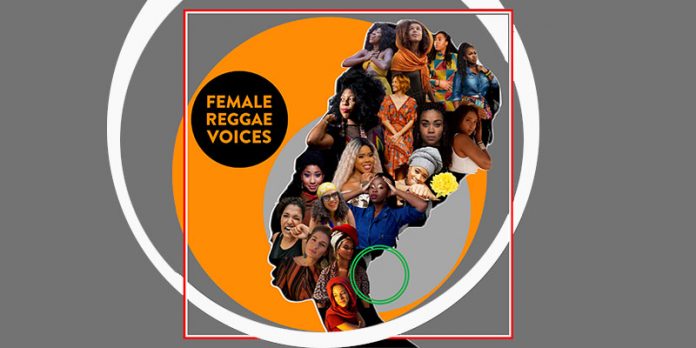 This is “Female Reggae Voices”, one of the very few international riddim selections with only female singers. 17 artists from all around the globe sing their song on one same instrumental, and the result is just amazing.

During the last couple of years there was a huge discussion going on about the fact that women are less promoted in music industry, booked less on festivals, given less exposure and being less rewarded for their art. The goal of “Female Reggae Voices” is giving the participating artists a boost in reach, audience, visibility and recognition, because the music industry is still a very man-dominated world, and so is the Reggae scene, too, unfortunately, in spite of the rising of artists like Koffee and Lila Iké. So in order to make a small contribution for change, here’s this brand new juggle album with only female Reggae singers!

You will see that “Female Reggae Voices” is more than just another riddim selection. You can feel the passion and commitment of the participants in every second, in every sentence of the lyrics. Each of the songs on this compilation is a real gem, every tune tells its own deep and important story. The artists sing about women’s rights, feminism, the ﬁght and struggle against racism, empowering themselves, they sing about freedom, love and unity.

When I came up with the idea of a juggle album, I would not have expected that so many of the singers I contacted would get back to me literally ﬁred up. I was surprised and happy that a lot of them replied positively and wanted to be part of this project. I was especially happy to hear from several singers that being on an all-female compilation has been a dream come true. And the wonderful thing about “Female Reggae Voices” is that there is effectively something like a bond being created between these artists: an exchange has started between them, they are supporting each other with feedback and empowering themselves. So I hope this project is a small, but sustainable contribution to change towards a more balanced and equal coverage and spread of music made by women. And I believe that the contributions of the 17 artists on this album are really impressively good. It is not «just another riddim selection», you really can hear the quality of the performances, the passion and love in these songs, which gives this album a very special value.
Res Staudenmann – producer

The ﬁrst “Female Reggae Voices” project was a short tour in 2018 in Switzerland, where four upcoming artists from the Netherlands and Switzerland were performing alongside Swiss Reggae band «Open Season». Samora, Naïma, Irina and Caroline Mossi played a couple of unforgettable shows and the feedback was amazing. That’s why Res Staudenmann, guitar player for «Open Season», decided to continue with the idea of
“Female Reggae Voices”.

The second project is a juggle album, a riddim selection with more than a dozen female Reggae singers performing on the same instrumental. The riddim is produced by Res Staudenmann, the ﬁrst version of the beat however was written by Thomas Ola for Swiss singer Irina Mossi. Because this original song has never been released, Res Staudenmann decided to develop the instrumental, change it from a pre-production state into an up-to-date production, record and mix it, and to release a compilation called
«Female Reggae Voices». The songs are mixed by Ludovic Hoarau from La Réunion and mastered by Swiss sound engineer Oli Bösch.

As for the tour in 2018, this compilation gives several female Reggae artists a possibility to come together on one album, to be heard and seen, to gain more recognition and to reach a wider audience. «Female Reggae Voices» is featuring female Reggae artists from several countries all over the world: Jamaica, the USA, Germany, Spain, Italy, the UK, France, Brazil, Switzerland and the Netherlands… It’s one of the ﬁrst and one of the very few international all-female riddim selections released in August.

Quotes from the artists (selection)

«Queen» is a song reminding women of their strength and worth, and to keep their heads up despite the things that may set them back. It’s about knowing your value and purpose then walking in them. – Joby Jay

«Let the ﬁre burn» is a song about the soul ﬁre we have to keep burning to make a change in our society. Feeling the pain and grief of generations of women, daughters, sisters and mothers, my heart is burning for a cause: Same rights for all no matter where you’re coming from, diversity and empowerment of all human beings. This song is calling my warrior sisters to step up, its a calling to everyone to stand against racism and injustice, to heal the wounds of the past to pave the way for a better future and make our dreams for equality come true. – Zoe Mazah

«Free Up» is a song that should remind you to let go of patterns that keep you down, that you should let go of bad habits, that you should see the positive aspects in life and not focus too much on the negative things. A lot of people are not even aware that they are stuck in these patterns. I want to show you that you have to free your mind, open up, stop complaining. Because I think that by freeing up yourself you can deﬁnitely reach more in life… – Samora

Females coming together is powerful. Therefore I am so happy that I was able to be a part of something so inspirational and impactful. This album gave me the opportunity to sing about things I was not able to talk about as a black woman. I hope my Single «Black» reminds my people that they are not alone. – SumeRR

«Testimony» tells the story of a very low time during COVID 19 and how the Most High was able to pull me through even when I couldn’t see how. It’s a reminder to everyone to hold ﬁrm in the toughest of times because the Most High has your back, always. – Rosh Rebel

It’s ﬁnally «Our Time» to get recognized for our hard work and talent. More doors of opportunity have opened up for us! More females getting booked for shows, winning grammys like Koffee. As a female in the industry I am just truly happy to get love, support and appreciation for my art and what I love doing. – K’reema