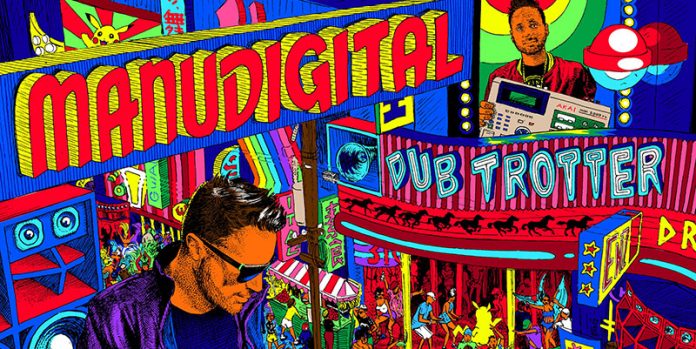 Beatmaker, bassist and producer specialized in digital Reggae, Manudigital is involved in music for over 15 years now. Also a composer, he participates in the recording of many international and French albums or singles, thanks to his great skills. Manudigital has collaborated with a bunch of artists such as Alborosie, Beenie Man, Bounty Killer…

Manudigital creates many video concepts such as the ‘Digital Session’ where he is surrounded by French and international artists such as Pupajim, Elephant Man or Queen Omega to name a few. His various series gets millions of views, are being shared on social networks around the world and meet an ever-wider audience. He has released 2 solo albums, “Digital Pixel” (2016) and “Bass Attack” (2018) as long as several EPs.

He is back today to present “Dub Trotter”, his ﬁrst and highly anticipated dub EP. Manudigital recorded this EP on the road during the last two years of tour around the world, hence the name of “Dub Trotter” in the manner of a globetrotter (Manudigital was 13th in the Live Export Awards of Le Bureau Export in 2019 – 130 gigs / 20 countries). Each track is named after where it was composed: “Mexicali”, “Canada Airport”, “Noumea Hotel Room”…

With “Dub Trotter”, Manudigital delivers a dub EP which transcends the genre, while remaining faithful to it, to venture into the ﬁeld of electro and bass music. He realizes with this new EP a real tour de force and a new demonstration of his incredible talent as a producer!