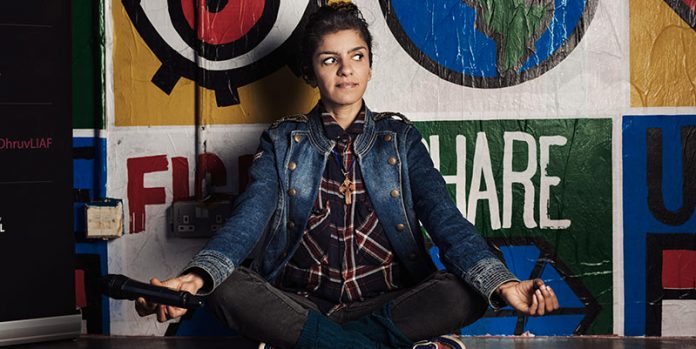 Soom T, a Scottish singer of Indian origin, grew up in a poor district of Glasgow. For her, music is an escape and her brother helped her discover her taste for music activism with Rage Against The Machine, Public Enemy or Cypress Hill.

After having campaigned alongside Y Network, a political group of young representatives from Glasgow neighborhoods aiming to change their city, Soom T decided to devote herself to music to denounce injustices and tell her daily struggles through militant and impactful lyrics.

She ﬁrst joined a hip-hop group, released a couple of bhangra songs (Indian popular music) and then discovered sound systems and reggae culture thanks to different crews and producers including Bus in Germany, Alex Paterson of cult electronic music group The Orb in the UK and later on Glasgow-based sound system Mungo’s Hi-Fi. If rap remains her favorite mode of expression, Soom T lets herself be seduced by the reggae-dub scene in which she feels free. Her ﬁrst performances in France were done alongside DJ Kunta with whom she will share, over the years, a common vision of music. She was quickly spotted by the public, notably thanks to her generous music and her incisive and inimitable ﬂow. Soom T handles lyrics with incredible ease and has always advocated sincerity in her lyrics. She then became an essential artist in the underground reggae scene.

After ﬁfteen years of activity and almost a hundred titles to her credit, she ﬁnally released her ﬁrst solo album “Free as a Bird” in 2015 on Wagram Music which shows the full extent of her talent and her musical spectrum. Will follow, “Ode to a Karrot” (Khanti Records) in 2016 then “Born Again” in 2018 (Strong Foundation).

For the recording of her new album, Soom T naturally turned to her friend DJ Kunta who produced the songs. Composed and recorded with the Lyon-based band Highly Seen, this new album entitled “The Arch” catches the essence of the music of the one we now call “the raggamufﬁn princess”! The musicians, mostly multi-instrumentalists, use modern, but also vintage techniques, giving their instrumental authentic ﬂavors. Soom T, as usual, manages to deliver highly committed lyrics while retaining a certain lightness to it. This new album is also the reﬂection of her Christian philosophy, as its title “The Arch” and artwork suggests, based on an extensive study of the gospels that have inﬂuenced all the songs. With her latest albums “Free as a bird” and “Born Again”, Soom T won the hearts of an eclectic audience. Since then, she has performed on the biggest European stages (Dour, Solidays, Déferlantes, Paléo, Vieilles Charrues…). In 2020, Soom T will hit the road again with her band to present on stage this brand new album “The Arch” which will be released on September 11th, 2020.

Uwe Banton Announces The Release Of His Track What Kind Of...