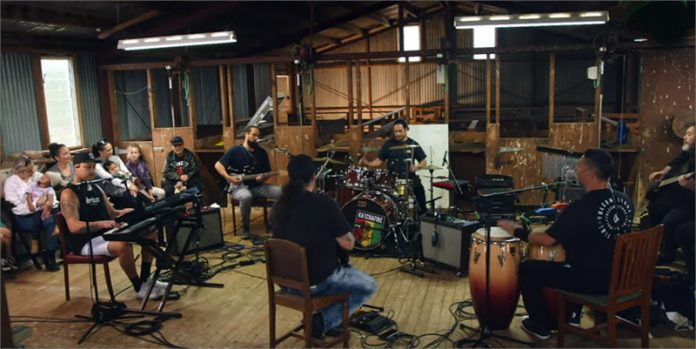 New Zealand reggae legends KATCHAFIRE are releasing their “100” single in Te Reo (Māori language) as part of the Waiata / Anthems documentary series which will begin streaming on TVNZ OnDemand on May 1. The “Karawhiua” (100) single will be available on all digital platforms from April 23.

The Waiata / Anthems series is a follow up to the original album which was released in 2019 marking the 20-year anniversary of Hinewehi Mohi’s first performance of the New Zealand National Anthem in Te Reo Māori at an All Blacks game during the 1999 Rugby World Cup. At the time the performance created a controversy which sparked a national conversation about cultural identity and the first language of Aotearoa New Zealand. Today, New Zealanders all over the country proudly sing the national anthem in both English and Te Reo Māori.

Documentary series Waiata / Anthems follows iconic musical artists from around Aotearoa as they translate and record their songs in te reo Māori, sharing untold stories of fear and discovery along the way and ending with a powerful live performance.

Recording the band’s first ever waiata reo Māori, Katchafire’s Logan Bell deals with familiar challenges many Māori face in reclaiming their language. He must confront his fears and the hurt caused by the loss of language.

Speaking about the recording Logan said, “I want to represent my culture… I want to represent Māori to the best of my ability, and I’ll admit, I definitely felt the burden to do this properly and to get the sentiment right. The first emotion that came up for me was fear. It’s not like I’ve grown up with Te Reo so I felt a big responsibility to do it justice.

I am a proud Māori man and I care deeply about the first language of this nation. My tamariki are learning Māori, but I have never had the opportunity to go there myself. There is a lot of tapu about this for many of us.
A lot of the Māori language has been lost in my family. My mum’s generation were pretty much forced to stop using the language, and culturally they were assimilated. It’s quite sad to me that when she was young, she stopped speaking it because society didn’t want it and you weren’t allowed it in schools. So it’s always been a yearning of mine to have that in my life and to make sure my kids understand tikanga Māori and Te Reo Māori.

The song I’ve chosen to translate, 100, was inspired by a conversation with my mum. She was asking me if things were all good on the road and I just said ‘mum, you keep it locked at home and I’ll keep it tight on the road’. It’s a tribute to our wāhine – those who keep the whānau and the homefront locked down, allowing us to do what we do; a thankless job that needs more praise and celebration.”

Shakdem Tells His Listeners To “Watch Out” for Badmind People