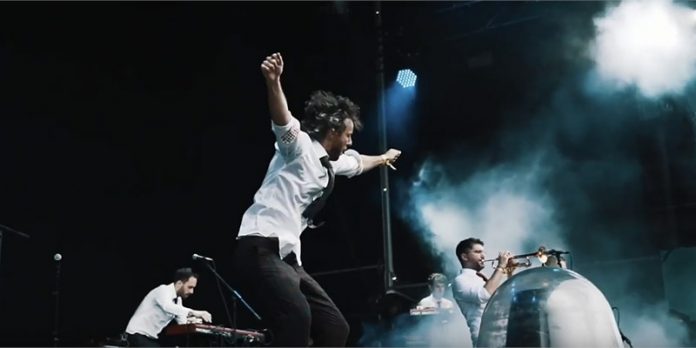 From the foundations of ‘The Big Smoke’, to the intergalactic heights of ‘Lost in Space’, Gentleman’s Dub Club’s voyage has taken them through ‘Fire’ and ‘Earthquake’ as they stop at nothing to discover and develop their sound. Consistently breaking genre boundaries, the eight Gents have delivered inimitable reggae, dub, ska, jazz, and electronica since 2006, and now, 14 years into their journey, they’re returning back ‘Down To Earth’ with a brand-new mix of beats and bass to kickstart the new year.

Partly recorded in Crosstown Studios and partly finished off at home, GDC’s 8th studio album was caught up in the midst of lockdown, sparking a window of opportunity to take the production to a whole new level. From live drums to heavy digital work, meticulous detail in the record shines through from the get-go, as album opener ‘Castle In The Sky’ demonstrates. After David Rodigan gave it an early thumbs up and a BBC 1Xtra spin in 2020, the deep bass rumbles, epic string segments, carefully crafted guitar solo and undeniably catchy vocal melodies helped ‘Down To Earth’ hit the ground running.

It’s the first time in well over a decade that GDC haven’t been on the road, giving them time to reflect and enjoy a moment of introspect. From the old-school, early Gents-influenced sounds of title track ‘Down To Earth,’ where the band look back at their proverbial travels and focus on their return home (“I’m back where I belong back where my roots can grow. I got the strength of the earth in my heart and soul”), to the smooth-as-you-like, sunshine sounds of ‘Smile,’ upon which the band appreciate the simpler times of being able to smile and interact with somebody in the street: “Sometimes it feels like I’m alone, stuck in my head scrolling pictures on my phone. I know there’s love that lies below, just gotta open up my heart and let it go”.

Second single ‘Honey’ features Hollie Cook, a true pioneer in her genre, who has been showstopping with her soulful voice since 2010. It’s the first time the two artists have fully collaborated together, and it was worth the wait. ‘Honey’ represents everything Hollie and GDC are about, straight from the heart organic reggae music that lifts the soul and hits every possible sweet spot. Joining the collaborators list is Bristol’s Gardna, one of the most explosive up and coming UK MCs today, whose contribution on ‘Night Shift’ takes the energy levels through the roof. A properly funky groove-filled bass roller of a track that doesn’t take its foot off the gas for a second.

Fully flexing their studio muscles, ‘Moonlight Dreams’ and ‘More Than Memories’ come in the form of a one-two production punch. With delicate synth and keys stabs, intricate guitar licks and effortlessly therapeutic vocals, both songs make for hazy and soulful easy listening. Much like the head-bobbing rhythms and big-room horns in ‘Sugar Rush,’ ‘Sunshine Revolution’ is a good-time tune that signifies the huge celebration we’re going to have in the near future and highlights how essential interaction is in a wider community: “Cause we’ve been waiting for so long; I see it coming from over the horizon, feel it pulling me so strong. Open up the door and I’m gone.”

The aptly titled album closer ‘Last Chance’ features more anthemic horn melodies in a no-nonsense, cinematic instrumental that wraps up the album in style. Reflecting on a reflective piece of work, each layer and texture rounds off nine other songs that were written, created, and delivered with the passion and energy that Gentleman’s Dub Club have consistently stood by since day one.

Lead singer Johnny Scratchley added: “We continue to grow as a band, both as a group and as individuals so whenever we choose to write a new album there is also a change in our environment. We love what we do and feel privileged to still be doing it after all these years.

“Writing and recording during the pandemic gave us more time, but also more space individually to work on our parts. Musically we are following on from our previous records, but this album feels more mature, including elements like strings and extra production elements as well as more developed structures.”

Armed with 7 studio albums and multiple single releases, Gentleman’s Dub Club haven’t taken their foot off the gas since starting out in 2006. Their relentless touring and onslaught of music has resulted in them playing to tens of thousands of people at a time. Without a doubt festival favourites, their explosive live shows are a gnarly experience of controlled chaos that have taken them from headlining tours to supporting reggae giants UB40 across UK arenas. They’re supported by some of the biggest names in the business including David Rodigan, Don Letts and Steve Lamacq too, and often receive mainstream radio support. There’s a reason why every show receives a sell-out performance, and why they’ve played such a huge part in the modern reggae revolution, it’s because they love what they do to the moon and back ‘Down To Earth’ – who wants to get involved?