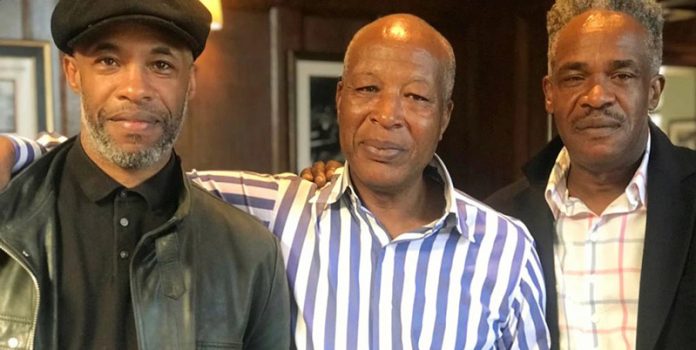 The Pecking’s story started in Jamaica as two best friends forming a partnership that would become world renowned. A young George Pecking’s and Coxsone Dodd’s set up their own sound system with Coxsone traveling to the US to collect RnB classics to bust up the rival sounds with Pecking’s in charge of bookings and setting up the dances. Members of their sound system included Lee ‘Scratch’ Perry, Prince Buster and Count Machuki – an incredible line up and a significant time in the development of reggae music.

George Pecking’s decided to head over to the UK during the sixties taking with him a suitcase of vinyl armed with cuts from Prince Buster and Coxsone, who had now built Studio One. With his access to the best vinyl sounds Pecking’s provided the Jamaican ex-pats a taste of home, love and unity through Soul, Ska and Reggae, the soundtrack of their nation. Pecking’s hooked up original UK soundmen Duke Vin, Count Suckle, Deuniss, Sputnik, Allardyce, Rex Deluxe and Daddy Vego.

From humble beginnings George Pecking’s love for music flourished as an established transatlantic business supply chain of pioneering sounds leading to the opening of Pecking’s Records shop in 1973, cementing his reputation as a role model and inspiration for the UK reggae community.

With this acknowledgement and success, the Pecking’s household in Shepherds Bush, West London, was bustling with top talent staying over on their travels from Jamaica. The likes of Coxsone Dodd, Duke Reid, Lee ‘Scratch’ Perry, Prince Buster and Bunny Lee inspired Pecking’s sons Chris and Duke as they grew up. In 1994, George sadly passed away, but his sons were inspired and primed to continue their father’s great legacy.

While the older Pecking’s sons, Tony and Trevor, took care of the shop the two younger brothers longed to develop their musical talent. Chris Pecking’s and Dub Duke were born as a production duo and Pecking’s Records stepped up to the next level. The brothers were encouraged by Coxsone, Bunny Lee and Duke Reid to reinterpret the classic rhythms so that they could carve their own mark in Reggae history. ​

They made a fantastic start in 2004 with debut LP ‘On Bond Street’ reigniting the career of Bitty McLean and continued with the discovery of Gappy Ranks while also recording with icons such as Tippa Irie, Tarrus Riley, Peter Hunnigale and Macka B. To date the Peckings brothers have released over 90 records, winning respect and acclaim along the way and were awarded both best label and producer at the British Reggae Industry Awards in 2013.

Reggae Revellers as the “Home of Conscious Reggae” are proud and pleased for the support from Chris Pecking’s in building our community and look forward to what the future will bring in promoting, developing reggae music on a global scale.