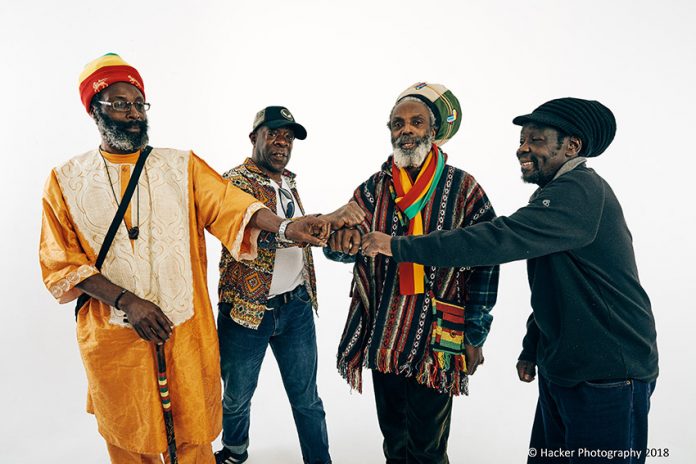 All our songs were inspired by the over sight of how the youth dem lost their way in the jungle of capitalism, slay-ing dem brothers and sisters without any hesitation. That brutality comes from the mindset of our so-called lead-ers. Especially the title track, Take It, which sums up the world’s concept, putting money before life, not of Jahjah, the almighty God, Rastafari”. So, says the band about this album. And when you read this, it becomes clear that Black Roots are not about to be turned away from the path that they have chosen. 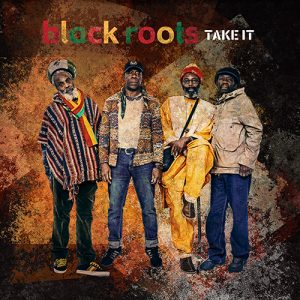 They have never shied away from making social and poli.” l commentary or singing about African emancipa.on. But always with that ability to be inclusive, encompassing all people and races into that message, speaking about knowledge, empowerment and of coming together to stand up and ﬁght against those that seek to oppress and enslave the poor and the weak in society.

It couldn’t be a more signiﬁcant .me in history to impart these messages as more and more countries lurch to the right infringing and dilu.ng the rights of minori.es, refugees and the poor. There are several references to chil-dren and how they must be protected as they represent the future. But when you see the plight that they are in, the band asks are we taking hunger, poverty, displacement and the eﬀects that this is having on them seriously? The band know this not to be true. It seems that war fuelled by greed is more important that building a world that is safe for them. There are references to false prophets making promises that are self-serving, that drive people into oppression by ensnaring and trapping them in a cycle of poverty and brutality that they cannot break out of. They refer to Trump as the reincarna.on of Hitler and to the Tories in the UK as false prophets whose gi6 is op-pression and false imprisonment. Has anything really changed, they ask?

Africa is a theme that they return to again and again. But in this set they speak of the world not being free un.l Africa is free and comparing the whole World to Africa. Perhaps they are reﬂec.ng that unless and un.l the most oppressed and downtrodden are freed then the World cannot be truly free.

This album builds on the work that Black Roots has done since 1979 when they ﬁrst formed in St Pauls Bristol. They exploded onto the independent music scene back in 1981 when John Peel, the legendary DJ on BBC Radio 1, showcased their debut EP on his show, hailing them as one of the best new reggae bands to emerge in the UK. A6er releasing several albums in this period (Black Roots, The Frontline, In Session, All Day All Night, Natural Reac-on and others) everything went quiet in the early 1990s. Their rebirth was engineered by Makasound who li-censed and reissued some of their early recordings in 2 compila.ons On the Frontline 2004 and In Session 2007. Most importantly this is followed by albums of new and original material On the Ground on Sugar Shack 2012, and Ghe’o Feel 2014 and Son of Man 2016 on Soulbeats Records. They are, also, performing live again delivering that conscious and uncompromising message with those harmonic vocals backed by a deep melodic roots reggae rhythm that makes them so unique.

Young Garvey on the Promotional Trail For “Slow Whine”