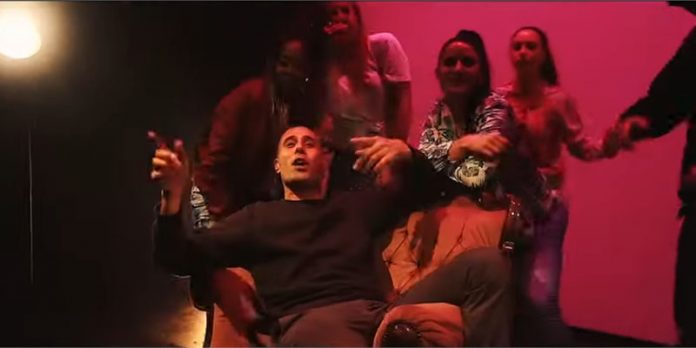 A raggamuffin combo at the crossroads of Raggasonic & Ward 21 which has all the advantages of a big machine made for the stage. The 3 toaster singers accompanied by the Live Mix of Irie Ites, composed of the producer playing and dubing his instrumentals versions in multitracks alongside a bassist, will make you dance and “jump” thanks to the sounds of a new exclusive energetic and percussive set.

Powerfull instrumentals, positive and impactful lyrics, dynamic and devastating flows are the ingredients of this formula which should ignite the festivals this summer.

For the moment, the crew will meet you on January 15, 2021 with a first single entitled “Big & Ready” from their future project to come in the coming months.

Created in 1999 as a collective, Irie Ites quickly became one of the major players in the reggae world in France and Europe. With more than 1 500 shows to his credit, Irie Ites has performed in the biggest reggae festivals either as a DJ set or accompanied by artists such as Eek A Mouse, Linval Thompson, Frankie Paul, Chezidek, Kabaka Pyramid, Perfect Giddimani, General Levy, King Kong, Chezidek, Lutan Fyah, Spectacular and many more.

p>Alongside the stage, Irie Ites has been producing One Riddims, EPs and artist albums since 2003.
His productions are recognized internationally and have allowed him to collaborate with the cream of Jamaican artists such as Sizzla, Capleton, Bounty Killer, Anthony B, Morgan Heritage, Lutan Fyah, Chezidek but also many veteran artists such as John Holt, Max Romeo, Linval Thompson, Eek A Mouse, Trinity, U Brown, King Kong. >

The label’s producer plays and dub the separate tracks of the instrumental versions accompanied by a bass player and effects machine. This formula leaves a preponderant place to the music and the live dub side while allowing an exclusive and original show with each artist on stage.

A brand new project is currently emerging since IRIE ITES LIVE MIX has teamed up with 3 big names of French reggae TOMAWOK, KEEFAZ, PUPPA NADEM in order to offer a new and exclusive show that is sure to return festivals and concert halls! !

After releasing 3 street CDs “Lyric’Hall“, “Clash pas l’Apache“, “Inna di tipi“, an EP “Eek A Wok“, two albums “Wakatanka” and “Weedamuffin” which have spoken well of him in France and abroad; after more than 1200 concerts in twenty countries, TOMAWOK is currently preparing its new album.
He has already collaborated with international artists such as Max Romeo, Yellowman, Sizzla, Ward 21, Perfect Giddimani, Spectacular, Tony Scott, Jr Cat. On the live side, the apache is exported abroad and this more and more frequently, we have seen it play in China, Jamaica, Mali, Cote D’Ivoire, Congo, India, Philippines, Hong-Kong, Vietnam, Cambodia, Thailand, Germany, Czech Republic, Belgium, Switzerland, Spain, Portugal, Mexico and this in big festivals around the world in particular at “Rototom sunsplash festival” in Spain, at “Goa sunsplash festival” in India, at “Irie Sunday party “in Manila (Philippines), Lebanon, Mexico, Georgia, …
On the video side, Tomawok has released several clips shot in Jamaica with a significant number of views, while his clip “La bonne solution” has exceeded 8 million views and is sung around the world.
In parallel with these solo projects, TOMAWOK has teamed up with artists KEEFAZ and PUPPA NADEM to create a unique raggamuffin combo around the IRIE ITES MIVE MIX concept.

Talented artist, KEEFAZ has forged a solid experience by traveling the roads with a powerfull show and a communicative energy that invites a real moment of exchange with the public. In a very open style, oscillating between modern Roots, Digital and Ragga Hip Hop, Keefaz has found the alchemy to adapt to all this music, alternating effective melodies, heady choruses and devastating flows of which he has the secret. .
Endowed with exceptional versatility, heir to Marley for his conscious lyrics, close to Daddy Nuttea and Raggasonic for the flow, with his multiple vocal facets, Keefaz transforms each music he touches into a real musical UFO.
After releasing 3 albums “On Vit Dans Un Monde”, “A Contre Temps” and “Mauvais Graine” as well as numerous singles for different producers, KEEFAZ is joining forces with TOMAWOK and PUPPA NADEM to create an exclusive combo around the concept IRIE ITES LIVE MIX.

Impregnated with the Raggamuffin style, straight from the sound system, PUPPA NADEM is a fierce flow and a worthy representative of Fast style. Rub a Dub, Reggae, Dancehall, Hip Hop are his favorite fields.
Since its beginnings, Puppa Nadem has played solo or in a collective with the Sound Dynamik (Don Pako, Singa Melody), the crew released an album “Reste à écoute” in 2014 which marked the minds of French reggae fans. He has performed more than 400 concerts since 2004 across France, Europe and the Maghreb.
All-terrain artist with explosive energy, PUPPA NADEM has teamed up with TOMAWOK and KEEFAZ to create an exclusive combo around the IRIE ITES LIVE MIX concept.