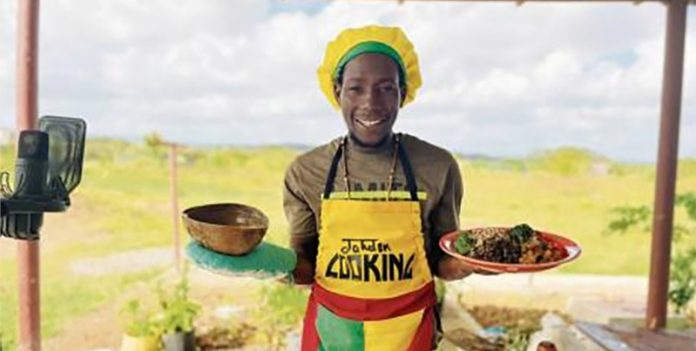 The Jahdon story neither begins nor ends with music. The reggae artiste has several talents, such as making traditional coconut palm brooms and cooking. He even owned his own cookshop, but was faced with choosing between the kitchen and the stage at the start of a professional career in recording music.

“I usually keep a stage show on my birthday, and while performing one year, I realised I was tired. It meant I was not performing at the standard I was capable of,” Jahdon shared.

At the time of that epiphany, the entertainer owned and operated a small start-up business in his home parish of Clarendon, known as Look Ya Noww Music and Food Rastarant, but found that he was running himself ragged.

He said: “In-between the business and recording music, I never have no time to rest. I needed to make a choice, so the next day, I locked it down.”

A drastic decision, Jahdon explained, “since the reason I did it (opened the restaurant) was to maintain myself, and the money from that was usually invested back into the music”.

An ital chef, he said he did achieve success in the culinary world, telling The Gleaner he “never dreamed” he would have closed the doors of the ‘rastarant’, especially where the options for vegan, plant-based foods were limited.

“I see myself going back into that business in the near future; cooking was and is a part of my lifestyle. I channelled it into my music, even before launching my independent label, Look Ya Noww Entertainment, and it always returns to my story and life skills,” he said.

Last year, Jahdon travelled to South Florida to promote his début studio album titled 369, with a mission to expand his musical footprint in the United States by connecting with local radio stations. However, a state-wide quarantine impeded promotional appearances and interviews. He had to find other means and ways to promote his brand, and he did.

“The making and selling brooms, which I used to build my breakthrough song, was something I had going,” Jahdon shared.

The Congo Bongo artiste found himself, once again, making brooms in South Florida, stamped with the red, green and gold imprint that not only made the household tools unique but in high demand. A large number of requests for brooms inspired Jahdon to include the hand-made novelty as merchandise.

Now he’s prepping the ingredients for his next big project – a flavourful reggae album perfectly seasoned with delightful lyrics and sounds capable of enticing any musical palate. The second track, aptly titled Cooking, which is produced by his label and distributed by Tuff Gong International, will be released on Friday, April 16. The first was a collaboration with Truvice titled Here We Go, released in January.

“The track [ Cooking] speaks to my personal approach to food,” he said, adding that the words “are seasoning up a new offering by Jahdon”.

Later this month, the artiste will also find himself inside a kitchen but not for the reopening of his ital cookshop just yet, he said. Instead, he will be launching Jahdon – The ‘Cook King’ series on YouTube.

“I don’t see any ‘rastarant’ around; this is a way for me to give people a strong musical vibration while at the same time teach them about alternative foods,” he said. “In my travels, I not only tasted these foods, but also educated myself about the benefits.”

He says viewers will be treated to recipes and cooking styles that will have their mouths watering, as he welcomes them into a space where he feels at home.

“I do a nice seasoned wild rice, with coconut milk, chickpeas, ackee and pumpkin, ital stews and quinoa that electrify the body and do all kinds of greatness,” Jahdon said.

“In times like these, a lot of people are hungry, and we need to be finding ways as a people to feed one another and in ways that promote healthy living. For me, it is with cooking and music,” he continued.